One thousand photos of snakes capturing prey in nature

The internet has been a tremendous boon for gathering and sharing observations about nature. Outlets for natural historians range from interactive websites run by academics like the Cornell Laboratory of Ornithology’s ebird, to informal discussion forums like the FieldHerpForum.

One of my favorite sources for natural history observations is the photo website flickr. Flickr is free to join, and is used by people from around the world. Flickr users’ backgrounds in photography are diverse: some are serious professionals, others are outstanding amateurs, and many just want to share snapshots. Consequently, many different kinds of photos are posted on flickr. When I started using it, I was struck by the enormous number of photos that illustrate the same concept in vastly different ways. You can easily see this by running a search for your favorite ecological term, from “amplexus” to “zooplankton“. You’ll get a huge pile of photos, many of them beautiful illustrations of nature. But running searches has some drawbacks: many off-topic images can clutter the search, and you may miss good images if they aren’t tagged with the search terms you used. One way around this problem is the use of groups, in which images and videos can be arranged by theme.

In 2009 I started a flickr group for one of my favorite types of natural history observations: snakes seen capturing and consuming prey in nature. The group has grown to include over 1,000 images encompassing tremendous diversity. My post today will highlight just a tiny bit of the diversity found in the Snakes Eating in Nature group. Later posts will pick out a few of the neat insights into snake ecology and behavior that come from the photos.

There are a few genera and species that are disproportionately represented in the group. From Asia, the keelback snakes (genus Rhabdophis), from Europe the water snakes (genus Natrix), from North America the rattlesnakes (genus Crotalus), the rat snakes (genus Pantherophis), and the water snakes (genus Nerodia) are all well-represented. One of the neat things about having many observations within a single genus or even a single species is that it gives a sense of the diversity of prey items. A great example of this diversity is the many photos of different prey items captured by the garter and ribbon snakes (genus Thamnophis). These snakes are found throughout much of North America, and vary in habits from fairly aquatic to mostly terrestrial. One of their most commonly documented prey items are frogs and toads. In many cases, the snakes are preying on breeding adult male frogs, such as this ribbon snake observed eating a Green Treefrog one warm July night in Florida:

Frogs aren’t the only amphibian that garter snakes enjoy; there are also quite a few photos of salamanders being eaten by garter snakes, like this shot by antonyrw showing a garter snake eating a newt:
One of the particularly neat aspects of this observation is that these newts are highly toxic to most predators (including humans), yet some species of garter snakes have evolved the ability to safely consume them.

Fish are also a frequent prey item seen in the group, as illustrated by this photo by Bill Gorum: Members of this genus will also feed on invertebrates, as illustrated by a photo of a gartersnake eating a slug taken by Christine Majul:

While we often think of garter and ribbon snakes as feeding on amphibians and invertebrates, they will also eat mammals, as shown in this shot by Matt Jalbert showing a garter snake eating a mouse:

Not even other squamates are safe from garter snakes, as demonstrated in this photo by Rob Klotz of a garter snake swallowing a horned lizard.

Within a single group like the garter and ribbon snakes, there can be great diversity in prey items. Moving beyond this genus finds even more diverse types of prey. For example Jordan Vos contributed this photo of a Stimson’s python capturing a bat:

Similarly, Paul Garrett shared a photo of a North American cornsnake coiling around a bird prior to eating it: 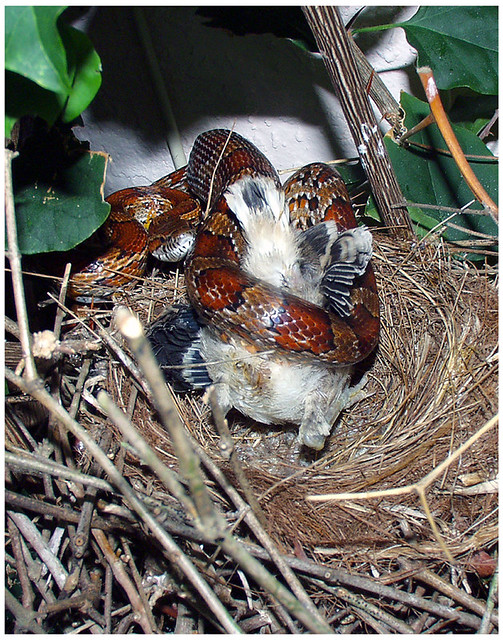 In nature predators are often themselves preyed upon by other creatures. That was the case for a garter snake I observed by a pond in Napa County, California, one spring day. Upon arriving at the pond I spotted a mix of black, white, yellow and red coils on the pond’s edge. Closer inspection revealed these two animals struggling. When I arrived the kingsnake had just grabbed the head of the garter snake. Ninety minutes later I watched the last bit of the garter snake’s tail disappear down the kingsnake’s throat.

Most of the snakes shown above are in the family Colubridae. The Colubridae is the most species-rich snake group, encompassing nearly 2,000 species. Most colubrids are non-venomous, although there are a few dangerously venomous species . While many of the photos in the Snakes Eating in Nature group show colubrids gulping down their prey, there are also photos of snakes from other groups, including venomous snakes and very large snakes. One of the most well-known groups of venomous snakes are the vipers. One example of a viper eating is this photo of a Massasauga rattlesnake eating a vole by Nick Scobel

Another major group of venomous snakes are the elapids. This group is well-known for their largely neurotoxic venom, and includes species like cobras. In North America, the only native elapids are the coral snakes, and they also show up in the Snakes Eating in Nature group. Here is a case of coral snake eating another snake, shown in this photo by HGHJim:

The Snakes Eating in Nature group has photos of hungry elapids from around the world. Here is krait eating another squamate in this photo by cowyeow:

And here is a photo by Ryan Francis showing an elapid called a bandy-bandy.

The snakes in the two photos above show some similarities. They are both eating other squamates and they both have similar patterns of white bands on black backgrounds. However, these two species are only distantly related and they are geographically separated. The krait was photographed in Hong Kong while the bandy bandy was photographed in Australia.

The group also contains several photos of particularly large snakes in the families Boidae and Pythonidae. For example, here is a photo by Marcos Cesar Campis showing Brazilian anaconda eating a large lizard: This is just a small sample of the many photos in the group. In the next post I’ll point out a few of my favorite photos that illustrate neat aspects of snake natural history. In the meantime, feel free to browse Snakes Eating in Nature and enjoy its diversity. If you have your own photos of snakes catching prey in nature, please feel free to add them!