A Caribbean frog showed up in Cleveland, Ohio, last week. A colleague stopped by my lab in the CWRU Biology Department with the news that an unusual treefrog had showed up in a Cleveland flower shop after hitching a ride from Florida. Of course we wanted to see this frog!

We immediately realized that it was a Cuban Treefrog (Osteopilus septentrionalis). Cuban Treefrogs are not native to the United States, but were introduced from Cuba. Since their introduction, Cuban Treefrogs have spread and become an invasive species that is harming native frogs in Florida. Cuban Treefrogs and other amphibians are frequently transported in shipments of plant and gardening materials. For example, I have received several reports of Pacific Chorus Frogs being moved around in Christmas Trees.

Here are some photos of the Cuban TreeFrog that visited Cleveland: 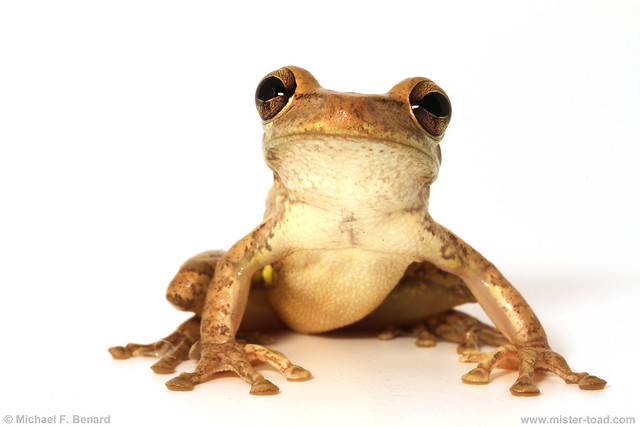 Map showing the distanced the Cuban Treefrog traveled from Florida to Ohio. Map modified from NationalAtlas.gov.